How to think different…

Over the past year, Say What! Communications has got to experience and support a larger than life creative thinker that truly walks his talk. Jason Surfrapp is that thinker.

The first lesson in getting noticed is “BE EVERYWHERE”. I really don’t know where or when I became aware of Jason Surfrapp, it might have been in a tweet or through a media blog, but one day in the summer of 2013 our online world’s connected and Jason’s bigger than life world started to pop up everywhere. Within a few days I was reading his proposal on selling pages to fund his then upcoming book… I was hooked! I loved his thinking of waiting until he had all of the 200 of his pages sold online before he would even start to learn about how to become a best selling author of a self published book.

Jason is not the typical “self-help” author – no, not by a long shot. Jason is a possessed creative doer who turns any problem upside down into a potential money making opportunity. And his book, which Say What! help publish through our endorsement on page 116, is an in-depth study into Jason’s twisted mind and it demonstrates how a former design studio partner found success by thinking and doing things differently.

Creativity is really just the ability to solve problems. And everyone knows that if you continually approach every problem with the same approach then all of your creative answers will be the same. And if you’re continuing to provide the same answers, then you’re not delivering anything that is truly different… and if I was your client, I’d say “Why should I deal with you?”.

Jason brings a new perspective to every project and develops a strategic plan on how to execute while maximizing interest and exposure. On January 1st, 2009 he launched “I Wear Your T-shirt” company on the simple strategy of becoming a company’s online face for a day by wearing your Company’s branded t-shirt for one entire day while blogging, reporting on online TV and social media broadcasting everything about your company.

I wear your t-shirt is a strange concept, and the catcher was the unique pricing model of a compounding scale which added an additional dollar every day. This business model started on January 1 for $1.00 and by December 31 was $365 for the day and the company grossed $66,795 in one year. This compounded marketing program grew to multiple people wearing shirts over the next few years and was a huge online story, with coverage by media and local news around the world. Jason became a media rock star – thanks to hard work, long hours and his total outside the box thinking.

Jason’s next venture was to auction off his last name to the highest bidder. A one time money making venture which meant that for one year he would legally change his name to whatever you wanted, a world first in marketing and naming rights. So for 2012 Jason Sadler became Jason Headsetdotcom for a cool $45,500 and then in 2013 he became Jason Surfrapp for $50,000, which also came with value added exposure of being the author name on his upcoming book “Creativity for Sale”. 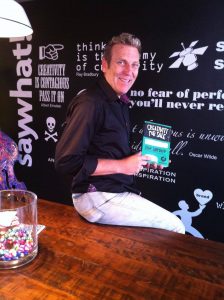 Grant Ivens, RGD at Say What! HQ in Markham

Next up for Jason Surfrapp was to write a self published book that would be profitable before it was even written! Not only did this business model turn the publishing world on its head, but Jason also retooled the world of crowd sourcing by creating his own crowd funding network. The book “Creativity for Sale” features 200 144 character messages at the bottom of every page from the sponsors of each page. A novel concept which sold easily through Jason’s online network which now includes saywhat.com

I highly recommend picking up a copy of “Creativity for Sale” on amazon, and to prove what a believer I am in this book, just give my review a read.

Enjoy and start doing instead of thinking about how you can be different than your competition.