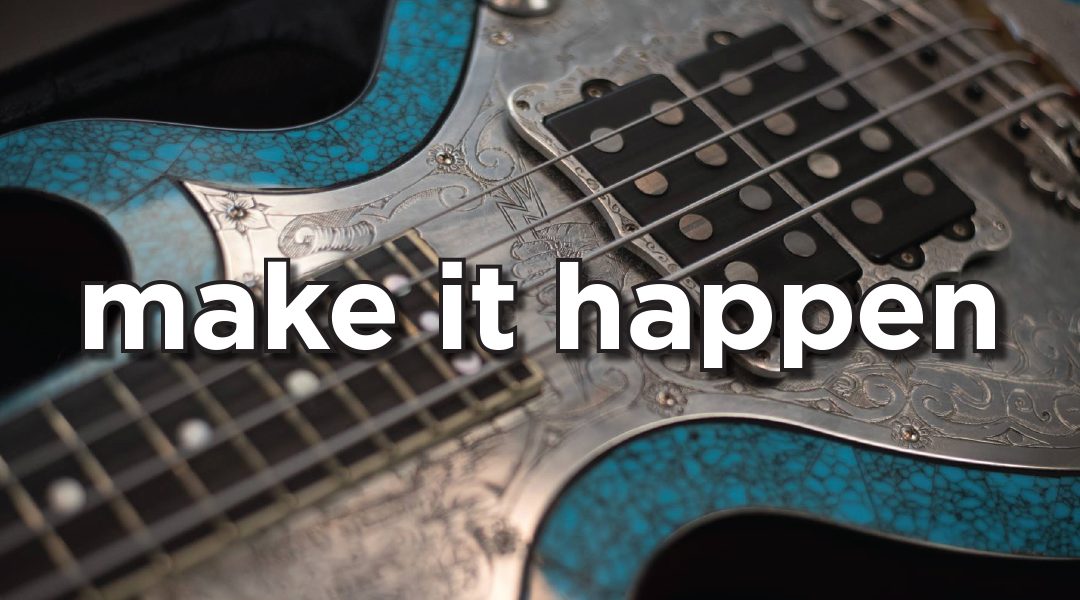 How to get what you want…

“just do it” was my father’s motto long before Nike started using it. “DL”, as my dad was known, was a very inspiring man who led by example. He believed that too many people were more talk than action. He knew that most people wouldn’t try for fear of failure and that would mean nothing would ever get done. He taught the importance of making things happen. 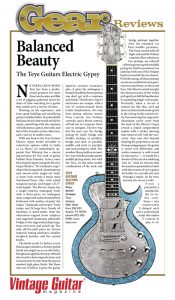 So a few years ago I was flipping through the pages of my favorite magazine “Vintage Guitars“, a fantastic publication dedicated to all things good about vintage and interesting guitars and gear, and I came across a review of the nicest looking guitars I had ever seen. The body was styled off a Les Paul with an aluminum hand-tooled engraved body plate with a 1” surround of inlaid turquoise stone… The swirling aluminum headstock was also engraved and had an elaborate Teye script. It was compared to the style made famous by the English Lutheran Tony Zemaitis, but somewhat different.

I studied the photo of this piece of musical art for hours… I read about how each guitar was handmade at a rate of one per month and how the Lutheran talked to hundreds of pieces of mahogany before he decided which one had the tonal quality to carve into a guitar body. I found out that the 3 custom wound guitar pickups were secretly configured with a mystery passive electronic sweep control that made this guitar a magical chameleon of sounds from a vintage 50s Broadcaster to a raging rocker that would blow Eddie Van Halen’s mind.

And the clincher that captured my imagination was the photo of this larger-than-life tall bald Norwegian with a crazy full teeth smile who lived just outside of Austin Texas where he built these guitars in his shop amongst the rattlesnakes. I decided I had to meet the wild artist and get him to make me a bass guitar like these 6 strings.

After a few hours in photoshop, I had taken the photo of that $10,000 Teye gypsy guitar and had changed it into an amazing looking full scale 4 string bass guitar. It was beautiful.

I then put together a well-crafted introduction note to Teye explaining my idea of commissioning him to create his first gypsy bass and how I had a major birthday hitting in 2 years and that was my present to myself… instead of a sports car or a Harley. I hit send, and off my concept went to some madman in the faraway hills of Texas.

The next day I got a very well written note from my madman. He said that with him being a guitarist he had never thought of building a bass until he opened my image.

He said “yes” and our journey began. 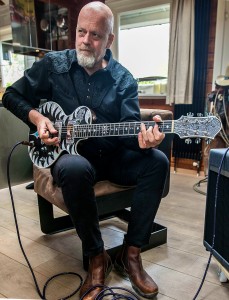 Over the next few weeks, Teye and I meet over long phone calls between Toronto and Austin, discussing everything from musical styles to playing techniques to electronic circuitry… It was like I was taking a guitar philosophy masters program. We shared jokes and stories of playing in bars and ducking flying beer bottles… I was working with and becoming friends with one of the top guitar makers in the world and I had never actually seen or held one of his guitars!

This was a mission of total blind faith…

A few knowledgeable guitar types said I was insane to get a guitar builder to do a bass… Others said I should rethink it and buy a vintage Fender Precision… I questioned myself and stepped back and let it go quiet for a few months… Teye was busy working on some orders ahead of me so all was fine.

Move ahead 4 months and I am looking at photos of full-size sketches and a ruffed out slab of mahogany and Teye is on the other end of the phone “Grant this is incredible, this piece of wood talked to me… It is perfect!”

I knew I made the right decision.

A few months later I was at the largest musical equipment show in the world, the 2009 NAMM show and I finally met the Scandinavian cowboy. He was taller and more animated than I could have imagined. We laughed and argued over the length and the components and I finally held and heard the quality of a Teye guitar. I smiled ear to ear…

Over the next six months, our heated debates and fiery discussions continued… The biggest debate was I wanted a full 34″ scale, like my Fenders, and Teye fought for a 30″ like the magical Dan Armstrong, and he went on to explain sound wavelengths and perfect tone…

I held my ground and we meet halfway at 32″! 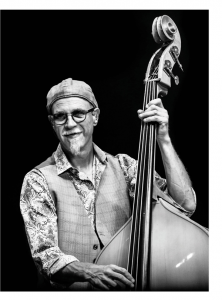 In September he had the full working bass complete and it was ready to test… So I enlisted the services of one of the world’s top bass experts, Ed Friedland, who also who lived in Austin, to examine and review every inch of this bass and to get back to Teye and me with his thoughts.

Ed called us and made some excellent suggestions to modify the bridge and tweak the tailpiece and lower the action, all with detailed photos and notes. Teye went back to the shop and made the modifications.

Later that week Ed called me and said “you know you could put diamonds on a hammer and it would still hammer in nails just like a $2.99 hammer… Remember this is just a tool.” I agreed with Ed, but I said “yes this is just a bass, but this is my bass and this is the first Teye gypsy bass in the world… and my hammer is a vintage Eastwing leather wrap… It is just a tool, but it is a beautiful tool that makes me feels different than any other tool.” 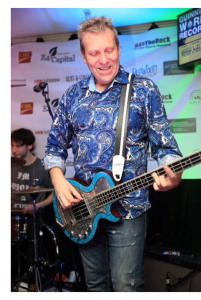 My Teye bass arrived in November 2009 and since then it has not missed one gig… My fleet of Fenders sit in their cases or occasionally hang on a stand as a backup. But my Teye gypsy is the most versatile instrument I have ever experienced. No one can believe this is the first bass Teye ever built and with my custom engraved fist holding a lightning bolt and the “first-ever Teye bass prototype” engraved on the aluminum swirls on the back, it is all mine!

Teye Guitars have since moved to Nashville and I am now their Canadian rep. When we visited in September 2019, my band played Teyes from the back of a tractor as we toured down Broadway.

It is amazing what you can do, when you think like ‘DL’ and say “just do it”.

What ideas do you have still sitting on a shelf?